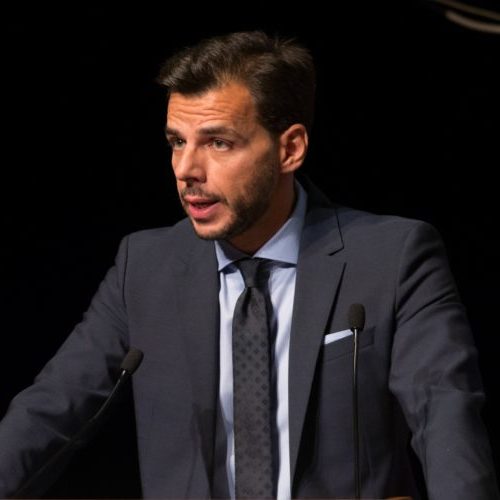 Vassili Apostolopoulos was born in Athens in 1972. He graduated from the Moraitis School and then received his Bsc in Management from the London School of Economics with first class honours and his MBA from Cambridge University. He also holds a PhD in Health Economics from the University of Athens.
Dr. Apostolopoulos is the CEO of Athens Medical Group, a leading health care services group in Greece and Southeastern Europe. The Group is listed at the Athens Stock Exchange (ASE).
The Apostolopoulos Group, of which Vassili is the CEO has interests extending from health services to insurance, real estate, and trade.
Vassili is also the President of the Hellenic Entrepreneurs Association (EENE). Furthermore, Vassili is a member of the General Council of the Hellenic Federation of Industries (SEV), a member of the Greek Medical Tourism Council (ELITOUR) and member of the Board of Greece of the Qatar Business Council.
He is a member of the Advisory board of the Hellenic Observatory at the London School of Economics (LSE), and member of the Board of Directors of the Center for International Business and Management (CIBAM) at Cambridge University.
Dr. Apostolopoulos is also a founding member of Hellenic club “Dielpis Racing and Touring”, aiming to promote motorsports in Greece. He also is a founding member and general secretary of the Cyber Security International Institute (CSIi) aiming to educate and inform on opportunity and threats on cyber space. Additionally, Vassili has been elected a member of the Board of Directors of the Athens Club, as well as a member of Chatham House, in London.
He is the recipient of the “Giuseppe Sciacca” international award for his humanitarian work and has received a special honorary from the Mayor of Fournoi Island for his contribution to the local community. He has also received an award from the chief of the Greek Coast Guard for his contribution to the corps and also by the Greek Police Union for his contribution to the policemen of Attica. Moreover, he has been recognised for his contribution to the American Greek Society by the Federation of Hellenic Societies of Greater New York.
In 2018 he received the Corporate Social Responsibility and Entrepreneurship in Healthcare Award.