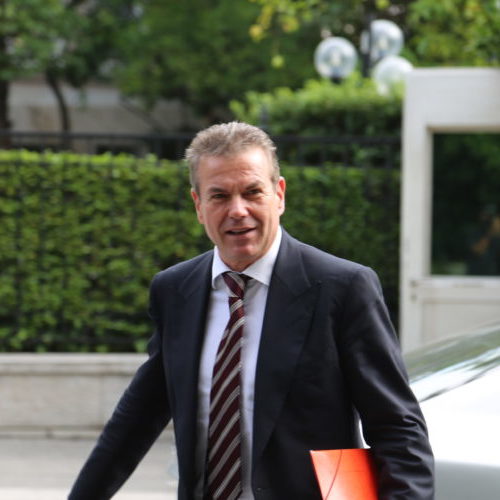 Born in Krestena of Ilia in 1960.
In March 1988 he was graduated from the Law Department of the Democritus University of Thrace.
From July 1989 until January 1990 he appointed Director of the General Secretariat’s of Labor Office as well as a consultant of Minister of Labour.
Served as a lawyer from 1992, he was hired in 1998 as mediator of Mediation and Arbitration Organisation (O.ME.D) and in 2004 he was promoted as a Referee and exercised these duties until November 2011.
He participated as a member of the trainers team of the “Administrative Reform 2007-2013” Program, as well as conducting seminars aiming to upgrade and improve the knowledge and skills of public servants in the field of: European law, public administration and social security.
From 2006 till 2009 he has been the elected President of the International Center “Mikis Theodorakis” and has been working for the development of the “Mikis Theodorakis” Museum in Zatouna of Arkadia.
He has published articles on labour and social security issues and his articles are regularly published in newspapers, magazines and legal journals. He was a member of the editorial team of sociopolitical magazine MONO.
From April 15 2015 till September 22 2015 he held the position of Governor of the OAEE.
From September 23 2015 he holds the position of Deputy Minister of Labour, Social Security and Social Solidarity.